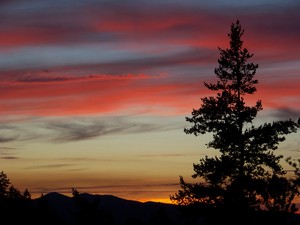 As the New Year approaches, I indulge in my annual evaluation of the past year, and what I feel is gratitude. I quit smoking (10 months and counting). I have lost weight (still making up for the weight I gained when I quit smoking… but making progress). I have a great band, and we had a great year. I have a remarkable partner with whom I share the journey, and she too had a good and growth-filled year. We spent three weeks in Guatemala, and I learned a lot about Guatemala, her people, and about myself. All in all… It was a fantastic year. Perhaps, the best of my life so far! So, in truth, I am feeling immense gratitude, for family, friends, music, and the simple things that make life meaningful. Times are tighter and leaner for us, as for many. Yet gratitude remains the foundation of my sense of things.

Then yesterday afternoon, Lynn and I braved the shopping mall. The great temple of American consumption was in full swing. Our task was simple, to return 2 items to one store, and acquire a couple items at another store. Neither of us likes malls. But we went anyway. We figured it would be a quick trip. Haaaaa!

It took forever to park, and even longer to escape the massive parking deck on the way out. It was noisy, bright, chaotic, and overwhelming. I found it progressively difficult to keep focused on the tasks at hand. The lights and sounds, sights and smells of the mall sucked us down the rabbit hole into a different universe. One where people were wearing outfits that cost more than my whole wardrobe. A universe where a conspicuous display of opulence is the norm, and appearing to have less than someone else is a shameful thing.

We accomplished our appointed tasks, and spent some time at the Seattle Mariner’s store on the way out. Lynn is a big Baseball fan. And a trip to see paraphernalia from her favorite team always puts a smile on her face.

As we were leaving the mall, I looked at the clock. Our simple errands took us three hours. For three hours we were inside the belly of the beast, and like the whale releasing Jonah, we were coughed back onto the shore of the parking lot and made our escape.

I reflected on the friends we made this past summer in Guatemala, on long-standing friends in Chicago, New York, Boston, Seattle, and all across the US. Friends near and far who are struggling to keep up with the mortgage, the rent, the medical bills, the cost of prescriptions, seeking clean drinking water, adequate shelter, clothing, and basic sustenance.

I considered the immense disconnect between the mall and the world we actually inhabit. It’s actually not so bad out here when you get down to it. Sure there are struggles, but there are solutions too.

People give to food banks and soup kitchens, shelters, clinics, and schools. People help each other out in hard times, providing food, assistance, clothing and money for utilities. We set another place at the table and we make due with less, so that everybody has something. This is the world I live in. This is the universe that consumes most of my time. A universe where people give and share, and sustain each other, no matter what.

And it seems fine, except when I go into the shopping mall. And then I begin to feel self-conscious. My clothes are out of style. My hair is both out of style and a mess. I really feel like I should be more dressed up. I am tempted by the colorful lights and well-groomed smiles in every shop and store, tempted to spend money I don’t have. Everyone else is walking around with bags full of purchases. People are well dressed, seemingly happy and carefree. They are here to acquire stuff. Or pretend that they are here to acquire stuff. Act the part, play the role, tow the barge, lift the bail, carry the false confidence that everything will be fine as long as we keep spending.

And then in the midst of it all I saw something that grabbed my attention: a new Tesla sedan. If you are not familiar with Tesla, they are a car company that has endeavored to re-envision the automobile. Rather than think about how to adapt existing technology to a low or zero emissions vehicle, they started from scratch and came up with a whole new way to make a car. They wanted to prove that an Electric Vehicle does not require one to relinquish style, performance, or function. And they have done so with panache.

And in contrast to all of the stores we saw at the mall, the Tesla store was simple and sparse. They had one car. No pushy sales people, just a bunch of free literature and the opportunity to inspect the vehicle. Help was available if needed, but mostly they just wanted people to see their vehicle. It is a magnificent bit of modern engineering, and a cost breakthrough as well. The new Tesla sedan comes in at $49,000.00. Yup! Lots of money. But their last car cost nearly $100,000.00. So, they have produced a more useful vehicle and reduced the price by 1/2, in just a few years.

The technology in the Tesla has the potential to revolutionize the automobile industry. And it is social entrepreneurship at its best. A company that is using the sales income from an expensive product, sold to people with means, to fund research on how to produce an inexpensive product for people with less means. Eventually (so say the rumors) they are trying to come out with a simple sedan in the $20,000.00 range. That’s still lot of money, to be sure. But imagine, an affordable electric vehicle that is practical and useful for the average commuter and/or family?

Other than socks and basic undergarments, the Tesla was by far the most useful thing I saw at the mall. It is a harbinger of hope and progress. It is a product that is trying to figure out how to use less and accomplish more. In the midst of the temple of consumption, the little tiny Tesla storefront stood as a beacon of hope on a stormy sea. A whole team of engineers, and sales people, socially conscious business people and cutting-edge inventors, all put their heads together to figure out how to make “doing the right thing” attractive, hip, trendy, and fun. Who says progressive change has to be gloomy and onerous?

If we are to engage in transformative work, we will have to find a way to make doing the right thing fun and attractive. There are coffee companies and chocolatiers, textile manufacturers, and farmers of every stripe who have their minds set on the same sort of sustainability. And I find it all hopeful.

Naysayers suggest that it is all a sham, just trying to bilk the public by charging more and more for products. Some say that social entrepreneurship is a cute idea, but it will accomplish too little, too late. From all sides I hear people critical of folks trying to make a difference, and make a living at the same time.

But I can say from experience, a dollar or two more per pound on coffee or chocolate here, has a huge impact on the quality of life in Guatemala. Buying textiles from cooperatives, where the women keep more of the profits, makes a big difference. Sometimes it is the small things that make a difference. And when enough people do enough small things in cooperation… it can make a big difference.

Yes I am a hopeless optimist. I believe that people are inherently good, and that people will make good or at least better choices, when presented with accurate information. From a choice in coffee or chocolate to a choice in automobiles or even elected political leaders… I believe that when people have accurate and useful information, they will make good choices. I know this may seem naïve. But it is what I see as I travel all year long. I see simple acts of consciousness and kindness spawn a ripple affect. And though I risk being labeled a hopeless optimist for my beliefs, I do think that we have the power to make changes in our behaviors that will have an impact on the world in which we live.

So, for my part, I will renew my commitment this coming year to buying more socially conscious products wherever possible. And to giving what I am able, even in times of austerity. But then the choice emerges: What if I can’t afford to give money to the homeless shelter and buy Organic produce? How do I choose which “right thing” to do? I don’t know. I ask myself that question every day. I buy used clothes at Salvation Army, so I can send more money to Guatemala. I pay more for Organic apples, even though I could give more money to my church if I didn’t. Choices.

There’s no magic 8-ball here. No quick or easy answer. We all have needs and we all have goals and dreams. But one of my crazy, pie-in-the-sky dreams is “enough” for everybody. And I’ll keep working for that sustainable abundance. Big ideas. No simple answers. But a commitment to keep dreaming, and building, and believing that simple acts of kindness and generosity compounded a million fold make a difference.