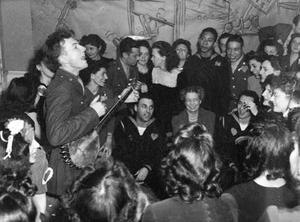 I will remember the first time I performed with Pete Seeger until I draw my own last breath.

I’m in a concert organized by AFM Local 1000, at the Folk Alliance Conference in Cleveland (2000). I’m standing on a stage that was set up inside Cleveland City Hall, with Pete right beside me. We’re singing songs to help close the School of The Americas. In the assembled crew of genuine folkies are John McCutcheon, Pat Humphries, Debra Van Kleef, Tao Rodriguez Seeger, John O’Connor, Charlie King, and many others. Time is moving in slow motion. I have never felt more alive, more in the moment. Nor have I ever felt more like I was exactly where I was supposed to be.

I am trying to contain my wonder at standing next to the musician I most admire in the whole world, and still sing the songs. And I slowly realize that for all he has accomplished, Pete is another human being. He is not a god, come down from the Olympus of Folk. He is a guy who just woke up each day, followed his conscience, and gave his best for the people he loved and the ideas he held as truth. In one fell swoop, I took Pete off of the unrealistic pedestal on which I had placed him, and began to build a friendship with a mentor. In the 15 years I knew Pete, he worked to lessen the distance between people. He both professed and lived out the idea that we are all in this together. I needed to have a hero, but Pete showed me that we can get so much more done if we see each other as allies and partners in the greater work to be done.

Earlier in the evening, I sang a few solo songs in the concert. During one of my anti-war songs, I sing “We Cry Out…” and the audience is supposed to reply “No More!” I was surprised that the assembled humanity got it so quickly. And then I looked straight out in the house, and there was Pete, throwing his fist into the air every time the words “No More!” came around. By the second chorus, he was motioning for others to do the same. By the fourth chorus, he had 400 people on their feet. I was at the front of the room, but Pete was in his truest element – rabble rousing, emboldening people to take a stand. I was humbled. My hero was literally “in the house,” helping maximize the impact of the song.

What I learned that night, almost 15 years ago, was a lesson that stays with me. And I’m sure I still get it wrong. But through a dozen more conversations and performances over the years, Pete continued to show me that we are only ever as moral, ethical, or just as our ability to lend our talents and resources for the benefit of others. And in a world that is all about creating differences, Pete built bridges. In the face of competition, he chose cooperation. In the midst of success and abundance, he was generous with his time, attention, talent, and money.

I’m guessing some of those lessons were hard earned. He wasn’t always that Zen-like. He earned it through lots of trial and error, I am sure. But he continued to give as well as he was able, and to uplift.

Ever seeking to do better, Pete lived a life that was noteworthy in my opinion– not because he was famous – but because of how he chose to use that fame. From picket lines to the finest theaters, from church basements to his Congressional Testimony before the House Un-American Activities Committee, he held on to his ideals. He never gave up on learning new things, musically or intellectually, and he had the courage of his convictions.

Another mentor of mine once said to me, “We all make mistakes. It’s what we do next that matters.” For Pete Seeger, beloved troubadour, rabble-rouser, organizer, and champion of the people, there is no more “next.” And I feel that sadness. And I feel the awareness that he commissions us as he departs, to keep up the good work. He made it look so easy to do. And, maybe it is that simple.

He sang about the hammer of justice, and the bell of freedom. But he always ended with the song about love. May we carry that song of love in our hearts and instrument cases, and sing it in a way that invites others to join in.