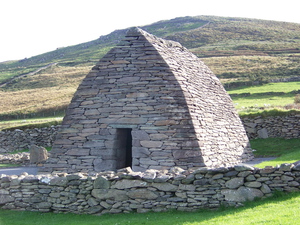 A Reflection: The Two Monks

Several years ago while I was on tour in Ireland, I had the pleasure of singing for Sunday services at the Unitarian Church on St. Stephen’s Green in Dublin. Rev. Bill Darlison was preaching, and he had some great things to say. But the story that stayed with me the most was a Buddhist parable he shared with us that morning. I find myself thinking about it a lot lately. It is a story that asks us to consider what it is we carry with us on the great journey, and what we leave behind.

Two Monks were traveling a day’s journey by foot from one monastery to another. One monk was old, gently quiet, and seemed not too bright. Even at his advanced age, he wore the clothes of a novice. Yet there was a gentle serenity about him. The other monk was young, eager, and full of a desire for advancement. He was concerned with rules and protocols, procedure and propriety. It happened that the two men came upon a young woman at a river. She was wailing and sobbing. They calmed her enough to get her story. Her father was dying, and she needed to get to a village on the other side of the river to tell her brother to come see their father one last time. But she could not swim, and was too frail and petite to wade across. Afraid of failure in her task, she was left weeping at the edge of the water.

Assessing the situation, the elder monk picked up the young woman and carried her carefully across the river, where she kissed him gently on the cheek in gratitude, and ran off to find her brother.

The younger monk was outraged. The elder monk had violated numerous precepts of their order. For several miles the younger monk lectured the elder at length on his indiscressions. Their order strictly forbade physical contact with women. Not only had he carried her across, but he let her kiss him! Who might have seen? What shame had he brought upon them? How would they be reprimanded by their superiors, if word got around?

After nearly an hour, when the younger monk had exhausted his ire, the elder monk said gently to his younger companion, “My dear brother, I left the woman by the river. Why are you still carrying her?”

I love this story because it teaches me something new every time I hear it. It is a meditation all by itself. Sometimes I am the younger monk, full of self-righteousness. Sometimes I am like the young woman, stuck in my panic and unable to think clearly enough to get unstuck. Sometimes I am the elder monk, baffled at why simple and pragmatic solutions to problems are met with scorn. But every time I consider these words, I realize that there are burdens I carry in my heart that I could leave by the river as well. I carried the burden of a tobacco addiction for years. 19 months and counting, I am free. I left it by the river. Next? How about you? What could you leave by the river, and be better for it? Why do you carry it with you even still, when you know you would be better off without that burden?

May your journey be easier tomorrow than it was yesterday. And may you find peace in the company of people you love, and the good work you do! PS... We (Joe Jencks, Greg Greenway, & Pat Wictor) are launching a fund-raising website for the new Brother Sun CD! We have been in the studio for several weeks (in between touring), working with our producer – Ben Wisch. We are very excited to see the record take shape. But it’s an expensive process. THANKS hugely to so many of you for contributing to this musical barn-raising already. But we have a long way to go.

So, if you are inclined to make a contribution on-line, feel free to browse on over to: http://www.indiegogo.com/brothersun for more information. We have several great incentives at various different giving levels. And we are grateful for every penny that comes in. And for those of you who already ordered at shows or via snail-mail – We’ll make sure you get the same perks. THANKS!!!