For The Love of Lilacs 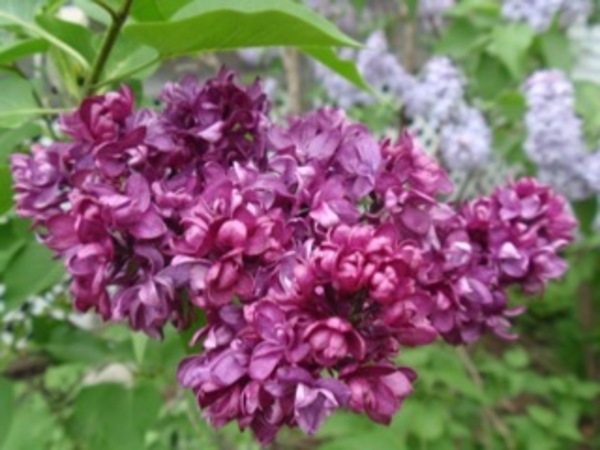 For The Love of Lilacs
Copyright 2021, Joe Jencks

Death and I have been in a tug-o-war since I was nine years old. For the first part of my life, my Grandma K. lived next door to my family. Her house was a sanctuary. I am the youngest of seven children in my family of origin, and have always been keen on serene and calm places. There is little serenity in a house filled with nine people and their extended community. So Grandma Kilbride's house was my sanctuary, a place where I could always go for a hug, a cookie, or some much needed quiet time. She used to teach me how to water and spray her plants. She had an amazing indoor garden and had turned about ¼ of her living room into a plant sanctuary.

When I was 9 years old, Grandma Kilbride died. She navigated a yearlong struggle with cancer, and succumbed in May of that year. I remember friends coming to visit and saying, “Ellen, we’re just so sorry you’re sick.” Grandma K. would respond with humor and reproach and nonchalance in equal parts, “I’m not sick, I’m dying. There’s a difference.”

The day of her death is etched in my consciousness. My family coordinated sitting vigil with her 24/7 during her last few weeks, in essence offering home hospice care with some guidance from visiting nurses. My parents and siblings prepared me for the moment of her passing, and talked about how Grandma K. would live in my heart. I knew what death was, or so I thought.

But on the evening when she finally died, I was filled with so much sadness and anger that I did not know what to do. It was hard for my nine-year-old psyche to integrate everything that I was feeling. I walked up and down the block to various neighbors’ houses, bearing the sad tidings that Grandma had died. And after my solemn rounds, I returned to our front yard to see the Lilacs in full bloom.

I don’t know what came over me. But I could not stand the beauty of them. Their vivid purple color was an offense. Their sweet, nearly saccharin odor was contemptible. I could not handle in my moment of loss, their immense audacity; daring to be beautiful and cheerful, and hopeful when I was so broken. I snapped. In full rage at having just lost my beloved grandmother and best friend, I picked up a big stick from underneath a nearby tree and I bludgeoned the Lilac hedge into oblivion. I beat it senseless until every blossom had been destroyed. Blow after blow I attacked the hedge. I was filled (I believe in retrospect) with the sense that the lilacs were taunting me somehow in my grief. I just could not abide by their obliviousness and unwavering beauty. When my world had fallen into such chaos, they had the ability to exist without care. The whole world should have stopped that day. But it did not. It kept going.

I beat the lilacs so hard it took nearly a decade for them to return in full glory. But they did return in splendor and majesty. That Lilac (tree would be a fairer assessment) was as old as the house, 1909. And it had seen worse than a broken-hearted 9-year-old.

And so it was, 10 years later nearly to the day, on the occasion of my father’s death that I again had a deep interaction with the Lilacs in the front yard. But this time it was a very different sort of connection. Gentle. Grateful.

My dad had been working to help one of my older brothers with a project. I was helping too. I had just returned from the hardware store. Dad had sent me on an errand to fetch a bag of “1/4 20 hex nuts and a bottle of Welch’s Grape Soda.” Not long after I returned, Dad had a heart attack. I did CPR to no avail. I can tell you the precise moment of his passing. I was inches from his face, doing compressions and blowing air into his lungs. He was there one minute and gone the next. He hung on for a while, but then the light went out in his eyes and he was just gone to wherever we go.

As a Korean War Veteran and a kid who grew up in rural Minnesota during the depression, he knew how to fight. He was tender and kind, but he was also tenacious and determined. Nonetheless, on this particular day his body ran out of fight. Even as the paramedics arrived, I knew it was too late. As I have looked back over the years sifting for meaning, I think if there were one last lesson he had to impart to me, that was it. Life is precious. Life is a gift. The people we love, are a gift. Sometimes even the people we don’t love are a gift. Love them while you can. We are here for an undetermined period of time. And when we go, it is a finite moment in time. Notice that moment. Honor the loss. Honor the love.

Late that afternoon, after Mom and I returned from the hospital, after time-of-death had been declared by the professionals, I went out into the front yard and looked at the Lilacs. My heart, once again was broken beyond measure. My mind wondering if I had been better at CPR, if Dad would still be alive? Autopsy later determined that no amount of CPR would have fixed his broken heart or mine. But there I was with my old friend, the Lilacs.

I walked across the front yard, the smell of fresh mown grass in the air. But this time I did not cause harm to these stunningly beautiful flowers. I cupped one cluster in my hand, drawing its transformative and luminescent scent into my nostrils. Then I sat under its branches, like falling into the arms of a cherished friend, and I cried. I sobbed. The intensity of the day and the immensity of the loss just starting to really settle in. The sweet scent of beauty, the salt of tears, and the unrelenting angst of unquenchable grief merged. And in that singular moment, I came forever to appreciate Lilacs as my flower. Lilacs are my sacred bond with the divine, and that occasional reminder that we are human, that we are mortal, and that while transition is a constant in the universe, transcendence and transformation are a choice. Must be a choice.

The time of Pandemic has been a tough time for a lot of people. And in modern western culture, we really don’t know how to deal with loss, grief, or death. We don’t know how to talk about it or honor it. We euphemize and spout platitudes as we try to avoid making others uncomfortable. We try to sidestep our own lack of understanding about how to be of comfort to those around us who have just lost a loved one. For the wellness of all of us left, we must get better at talking about loss, grief, and death. And in order to help others have tacit permission, we must ourselves become spiritual warriors, willing to walk unarmed like Gandhi, into the Billy Clubs of whatever emotion waits for us.

It is not an easy thing to do, but we can gently learn how to grieve better. It is a practice. And as I grieve now 39 people I knew and loved and called friends, people who were on this planet 18 months ago and are now no longer here, I realize that grief is not a singular thing any more. It must be a practice. Because I don’t have time to grieve each loss individually in the way I could earlier in my life. I must learn how to grieve the losses collectively. Because I also need to keep being devoted and dedicated to the living. I need to keep loving each day and not live in a valley of sadness. I am still figuring this out. But I am on the path. And every time I smell Lilacs, I am brought into awareness of both loss and love. And with gratitude I will seek the Lilacs, and let their transcendent beauty enfold me as I both remember and love forward.