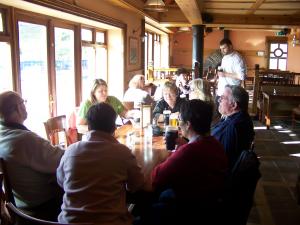 Joe buys the first round for the tour group... their first pint on Irish soil.

We stayed in Liscannor last night, and went to Doolin for a great meal and some really excellent music in the pubs. Irish stew, genuine Irish chips (fries). I baffled the bar tender by waiving off a pint in favor of tea. By the time I hit the rack, I had been up for more than 36 hours with no sleep. I was really loopy. And I only got about 6 hrs of fitful sleep, but it was good to be horizontal.

Today Tom (our Irish guide) and I went back to the airport to round up our travelers. We are 10 folks from my fan list in the states, brave souls willing to take this trip with me to explore part of Ireland. Bob & Ellie from Cincinnati; Jim & Virg from Michigan, Melanie from Maryland, Kelly from Seattle, Holly from Portland, Emily from Maryland, Skye and his mother Berdine from Philadelphia, plus myself, Tom our guide, his new assistant Penelope, and our driver Paddy. We had a few snags getting all of us together. But we seem to be in fine shape now that we are all in the same place. Yesterday I was the one in a stupor. Today, I have 10 weary travelers who are in the same shape I was in 24 hrs ago. Safe to say were in pretty good shape for the shape were in though.

We went through Tralee, and as I was wondering about, I turned a corner and walked right into the entrance to the local Sin Fein office. I had a marvelous chat with the gentleman who works there about local politics and happenings. I bought a few postcards, and some flyers about the seven signatories of the Proclamation of the Irish Republic. This happened back in 1916. All seven signatories were executed in Dublin in 1916 after the Rising. The were: Thomas Clarke, Patrick Pearse, James Connolly (my favorite of the fallen heroes), Sean MacDermott, Joseph Plunkett, Thomas MacDonagh, and Eammon Ceannt. I intend to go to their memorial site in Dublin in about a week and one half. It is moving just to read about these folks and their courage, standing up with their lives for the right of all Ireland to be a free and unified country. Nearly a century later, some of their goals have been achieved but many have not. However, their vision lingers on and their courage and foresight still guide many good and hardworking people in Irish Politics, including Gerry Adams. I will write more about Sin Fein and Mr. Adams later in the trip. But suffice it to say, I was moved.

After that, we went to Inch Beach, where our last tour member caught up with us, and had a great lunch. I bought everyone their first pint on Irish soil. Since I had a Guinness yesterday, I tried the Murphys. Liked it better than the Guinness. (Better not say that to loud eh?)

After lunch, we took a walk on Inch Beach, on the shores of Dingle Bay. The sun was coming lower in the horizon, and the view across the bay toward MacGillycuddys Reeks (mountains) was spectacular. It seemed like we were really beginning the tour. As we all wandered around the beach and talked and breathed the sea air, I was reminded of my years living in Seattle. I was a part of a traditional Irish band there called Cunla. When we were playing in the pubs back then, I had the sense that I was missing something. Like I was at a Walt Disney Irish theme park. Six Flags over Blarney if you will. It was always sort of like something, but not really it. You could look behind the veneer of Irish-ness and see America.

So, last night in Doolin, I was not quite at ease as I kept looking for what was behind the stage set that looked like Ireland. Today, with more sleep and a little more time in this time zone, it becomes obvious that this is the real thing. It sounds weird, but its just the way it felt. Last night I kept looking for the telltale signs that this was just another place in America like a movie set. But today, as I walked around Tralee, it started to sink through another layer of consciousness. I am in a country scarcely larger than the state of Illinois, and yet it is its own country and one that has contributed substantially to global culture. Natives here view regions of Ireland in the same way we might view different states. Ireland has its own regional dialects and accents, and people in various regions have an identity and a sense of place that is just as definable as any state in the US, perhaps even more so in some cases. People have prejudices about folks from other regions. And they have a sense of identity as a people that is palpable.

We will stay at the same inn here in Dingle for three nights, and take some day trips from here. I look forward to a good hike on Thursday. In the hill on the Dingle peninsula. I saw Irish fishing boats today for the first time. And I had some locally caught fish for dinner. It was great. REALLY fresh.

We sat in a circle after dinner, and Tom and I shared some modern and traditional music with the crew. Tom is VERY knowledgeable of the folklore and the history of many parts of Ireland. Himself is an AMAZING singer of Irish songs as well. Some of the crew shared songs and reflections too.

Yesterday, Tom took me by some abandoned houses from the time of The Great Hunger. It was powerful. Amazing stone houses abandoned because someone had died in the house. And it was considered bad fortune to keep living in a house where people had died under such terrible circumstances.

The Great Hunger as many call it, is also called the Famine or the Potato Blight by others. But is also called genocide by some. At the time of the Great Hunger the Irish were forbidden to grow other food crops besides Potatoes in any great quantity. And at the peak of the blight, relief ships came if from America and Europe with food and supplies to help the starving Irish. Even Native Americans themselves on reservations and starving, having only a few years since suffering through the trail of tears, sent money to the Irish. It is apparently documented that Native Americans sent more relief money to the Irish than did the English government during this time.

But when aid ships arrived in Irish ports, they saw scores of British merchant vessels leaving port laden with literally TONS of food. It is estimated that for every relief ship that came to call at an Irish port, there were six ships leaving Ireland filled with potatoes, beef, lamb and other sustenance bound for England. There was no shortage of food. An imperialist government systematically starved the people, and their resources were taken again and again, causing more than 1.5 million to die on Irish soil. More than 2.5 million also left Ireland and take their chances on the high seas traveling to America and other destinations. Ireland lost over 1/2 its population in about 7 years. (Between 1840 and 1850.)

As a result there are countless abandoned homes and cottages scattering the Irish landscape. There are places where there are mass graves in Ireland places where up to 1000 people are buried in a single mound, with no markers what so ever. It was a sobering thing to see.

Tom and I also had an enlightening discussion on the politics of whiskey. We were talking about what makes something Irish whiskey. It began with a discussion of single malt whiskeys and whether or not there are any true Irish single malts. That discussion is yet to be settled. I suggested that Bush Mills, which creates a number of single malts, was an Irish whiskey. Tom and the proprietor of the Inn told me in no minced words, that it is not Irish. It is protestant. The Bush Mills distillery, located in the North, refused to hire Catholics. They were in fact very hostile toward the same. For that reason, many people in the Republic still refuse to buy or serve the stuff. Hmmm. More on this later too, I am sure.

Yesterday, while I was still in my jet lagged stupor, we also saw a church, that had a big stone carving of Sile Na Gig (pronounced - sheela na geeg) on the side, over where the main door would have been.

Sile Na Gig is a goddess of fertility. The churches would sometimes bring her into church architecture, to lure in the pagans to reassure them that this was just a new way to look at their gods.

At the same church we visited, there was a unique cross on the side. It is a Coptic Cross. The Coptic Christians from the Middle East came to Ireland and brought with them a lot of knowledge of healing and medicine. They started hospitals. And the sign on their hospitals was a snake wrapped around the Coptic Cross. Tom tells me that this is part of how the Caduceus was born, from the Coptic symbol. And furthermore (Now this will be really tough for some to read I am sure), St. Patrick did not drive snakes as a species out of Ireland. There is no record geologically of snakes being here in the first place. Even if they were here before the separation of Pangaea (the original one big continent that split through tectonic movement into the ones we have now) the last ice age would have wiped them out. Not, St. Patrick. He was a jealous evangelizer and wanted no competition. He drove out the Coptic Christians! And with them, the most advanced healers that Ireland would see for centuries. It was the snake symbol of the Coptics that became immortalized in legend as being driven from Ireland. When in fact, it was other Christians. Interesting eh?

After our sing around tonight, we closed the day with a pint in the pub at the inn. I got to know a few of the staff. Pavel is from the Czech Republic, and is here in Ireland for work. He will join his girlfriend in Thailand, until she finishes here contract there in 2 months, and then they will be off to Malaysia then back to he Czech republic in the late spring perhaps. I found out the minimum wage in Ireland is nearly $12.50 per hour US. Whats ours? $5.45?

Another staff member, Aaron, is a native of Dingle. A really pleasant 24 year-old fellow, he will be here for a few more weeks as well, and then he will go to India for the winter. I learned from him how to spell my name in Irish. Seosaimh. (It is pronounced: Sho-seph).

Really tired now. Off to bed. Godspeed all